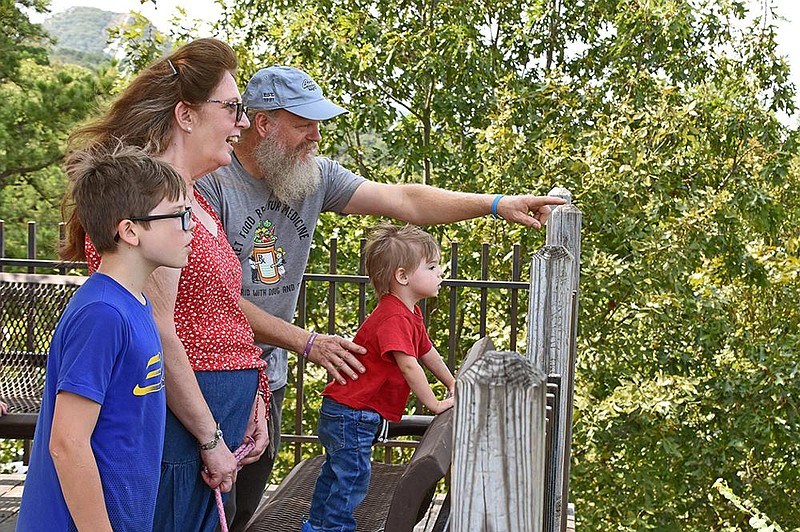 Forest Klinedinst of Sheridan points out a boat on the river to his wife, Rhonda, and grandsons Peyton Stewart (left), 12, and Pierson Stewart, 1, while visiting the scenic overlook at Pinnacle Mountain State Park in Little Rock in this September 2020 file photo. - Photo by Staci Vandagriff

Arkansas' state parks have seen an uptick in visitors this year as the coronavirus pandemic has renewed outdoor enthusiasm across the nation.

The number of visitors to state parks topped 90,000 at the end of April and hasn't fallen below that number since, the data stated. The largest spike in guests occurred from May 18 to May 24 when 281,862 people visited state parks.

Meg Matthews, a spokeswoman for the parks agency, said the increase in visitors is undoubtedly pandemic related.

"We are happy to provide a place for families who have been isolated together to be able to enjoy," she said. "Those walls start to close in after so many weeks."

Arkansas' parks have remained open to some degree during the the pandemic, but restrictions have been put into place to help prevent the spread of the disease.

Matthews said the administration building is open for park business with limited capacity and hours. Operating hours will be cut at visitor information centers, museums, restaurants and two marinas in an effort to efficiently manage available resources during the recent increase in infections statewide.

"We are also encouraging people to make reservations online," Matthews said. "Our goal is to keep our staff and guests as separate as possible. Noncontact check-in accomplishes that goal."

Matthews said RV camping has been one of the main contributors in the influx of visitors. She said an RV being a self-contained unit makes it perfect for use during the pandemic.

"RVs offer the cleanliness of being inside, but also allows you to still be outside and enjoy each other's company," she said.

"It's a great way to spend time with other people, and you can socially distance while hiking, mountain biking or just walking around," Matthews said.

State Parks Director Grady Spann also serves as president of the National Association of State Park Directors. Spann said the national group recently held a virtual conference where officials from across the country mentioned having an uptick in visitors this year.

"It's great that a new generation of park users are discovering our state parks across the nation," Spann said. "We are introducing some of the state's most iconic sites to a whole new generation."

Many of Arkansas' neighbors also have had record numbers of visitors.

USA Today reported in September that parks of all sizes have had an influx of people, and The Associated Press reported that Tennessee's parks had sold more than 62,000 camping nights in October.

That marked a one-month record for camping stays in the parks system, according to the Tennessee Department of Environment and Conservation. The number eclipses the mark of more than 57,000 camping nights set in June of this year.

Visitors are increasing at Oklahoma's parks as well. The Norman Transcript reported that the state park system has had nearly 10.6 million visitors, an increase of more than 2.5 million from 2018 and 2019 over the same period.

The Missouri State Parks website also noted that its parks were experiencing high visitation and that capacity was being monitored to prevent overcrowding.

Matthews said it's difficult to tell how many visitors to Arkansas' parks are from out of state because entrance is free.

"Some people will just drive in and spend a day at the park and leave without making any reservations," she said.

The agency's biggest challenge during the pandemic, Matthew said, has been preventing people from gathering in groups while at the parks.

"A natural response is for human beings to want to be around each other," she said. "If we do see any groups gathering, we have our staff ask them to disperse."

Limited space is also an issue.

"We have hundreds and hundreds of acres at our state parks, but once the parking lot is full then we close the gate and we can't let anybody else in because we are at capacity," Matthews said. "This was not something we were overly concerned about before, because we wanted as many people as we could handle."

"Some of our neighbors charge at their state parks, so they can actually set a limit," he said. "Since we don't charge, we had to adopt a way to control the capacity of our parks."

Spann said the beginning of the year was a challenge, but he applauded Gov. Asa Hutchinson's decision to keep state parks open.

"It was a good strategy to allow people to have a break from normalcy and visit a state park," Spann said. "We are an essential service to our guests, and we never closed. I am proud to say that we never closed."

Matthews said park officials are are taking every precaution they can for visitors' safety.

"We want visitors to wear masks when necessary, socially distance and use hand sanitizer," she said. "We also want people to consider another hiking trail if the first trail is crowded. Maybe take it as a chance to explore."